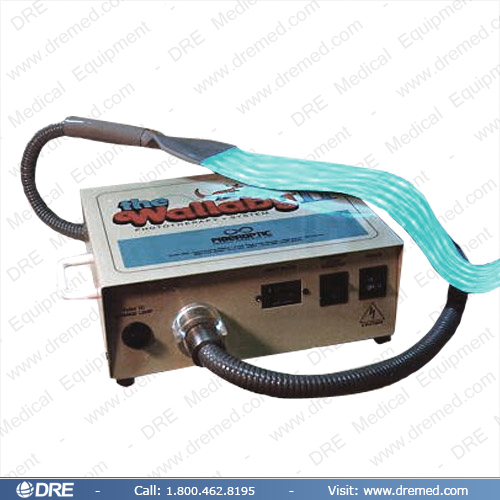 The Healthdyne (formerly FibreOptic, now manufactured by Respironics) Wallaby devices use a flexible long, flat fluorescent panel attached to the main unit by a short connector. The earlier Wallaby (model MD-1000) was replaced by the Wallaby II (model MD-2000), which has two levels of illumination controlled by a rocker switch on the front panel, and a second bulb which the clinician can swing into place using a panel-mounted pushbutton when the first bulb burns out (the Wallaby also has a spare bulb, but the housing must be removed to install it). Respironics replaced the Wallaby II with the Wallaby III (model H-3600), which uses the same fluorescent panel as the Wallaby II, is lighter (7.15 lbs. instead of the 14 lbs. of the Wallaby II), has a longer bulb life (285 hours on level 1 and 600 hours on level 2), and automatically switches to the second bulb when the first one burns out with no action by the clinician. Manufacture of the Wallaby II was discontinued in August of 2000, but the company promises service support for 5 years.

All Wallaby systems have safety circuitry which cuts off power to the unit if bumped, pushed, or overturned, or if the case housing is opened during operation.